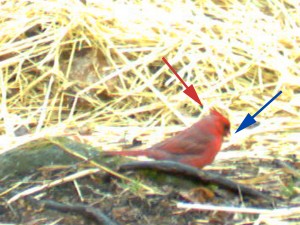 Appearance/Behavior:  This medium-sized (21 – 24 cm) bird has a distinctive crest (red arrow) and prominent beak (blue arrow).   The male is red, while the female is olive brown.  Both sexes have a black mask.

Relative Frequency of Visitation in Study:  Only a single image, a male (above), of this bird has been recorded at the compost piles (by chance during a routine noontime test image capture).  Although relatively common in the vicinity of the study site, this species likely prefers more open areas than the pile locations.

Seasonal Activity: Year-round.  The single image of this species was recorded in early spring.

Similar Species: The only other bird with a pronounced crest that visits the piles is the blue jay.  These two species are easily distinguished based on coloration. 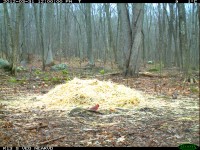