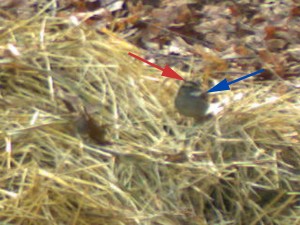 Appearance/Behavior: The white-throated sparrow is a small (16 -18 cm), brown and gray bird with a distinctive white throat patch (blue arrow) and black stripes on its head (red arrow).  It is one of the smallest birds encountered at the piles.  The sole encounter of this species was a flock of three with a robin.  Perhaps the small size of this species is insufficient to trigger the camera’s sensor if it visits without a larger species present.

Relative Frequency of Visitation in Study: Very rarely encountered in the study, with only a single visit by a flock of several visitors.

Seasonal Activity: The single recorded visit was in late November.

Similar Species:  The only other small, sparrow-like bird encountered at the piles is the dark-eyed junco.  The solid black head and back, along with its white breast, set the junco apart from the white-throated sparrow. 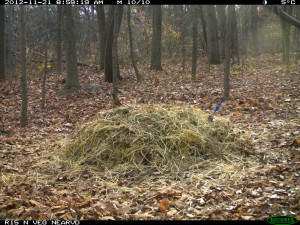