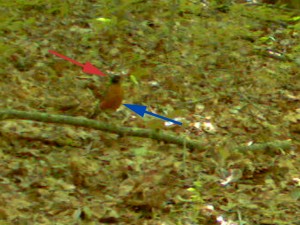 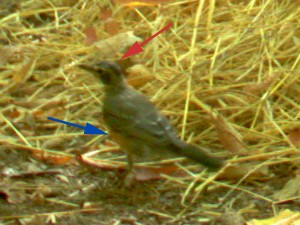 Appearance/Behavior: The American robin (about 25 cm) has a red/orange breast and underparts (blue arrow) with a white rump.  Its back, tail, and wings are slate gray and contrast with a black head (red arrow) with a yellow beak and black and white throat area.  A modest portion of the limited number of robin images include gray squirrels at the compost piles, with the robin in the background, suggesting the robins’ presence in the image may often be incidental.

Relative Frequency of Visitation in Study: Rather infrequent.

Seasonal Activity:  Year-round.  Most encounters have been in the spring and fall, although within the area of the study site, the robin is a common breeder in the summer and an infrequent winter resident.

Similar Species:  No other species in the study has the combination of the robin’s red breast, gray back and black head.  The mourning dove is more uniformly gray and has a plumper appearance.  The dark-eyed junco may also have a slate gray back and dark head, but is a smaller bird that lacks the red breast. In a blurry image, the juvenile common grackle with its brownish plumage could potential be potentially be confused with the robin.  The grackle, however, lacks the robin’s red breast. 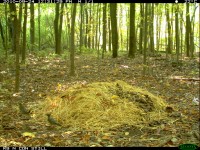 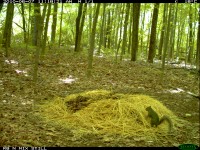 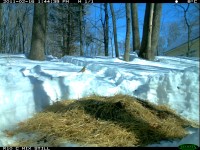 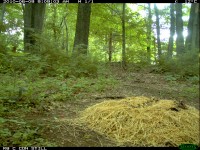 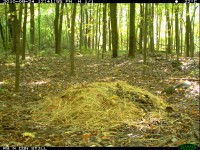 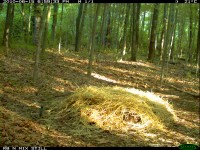