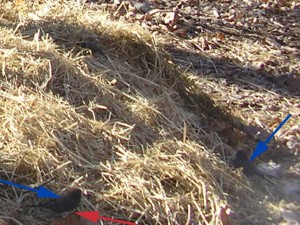 Appearance/Behavior: This sparrow is one of the smallest birds (15 – 17 cm) encountered in the compost study.  The junco is black to slate gray above (blue arrow) with a white belly (red arrow).  Its short, wide beak is light-colored, contrasting with the plumage of the head.

Seasonal Activity:  Primarily a winter visitor.  From the study site, the junco migrates north to breed.

Similar Species:  The two other gray-backed avian visitors documented in the compost study are the mourning dove and robin.  Both are larger than the junco.  The junco lacks the mourning dove’s typical dove-like profile. Additionally, it has white underparts as opposed to the tan underside of the dove.  The robin’s characteristic red breast is lacking in the junco.  The only other bird in the junco’s size range that has been encountered at the piles is the white-throated sparrow which has a distinct white throat patch and black lines on a brown head. 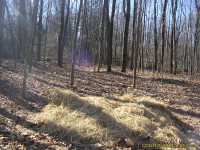 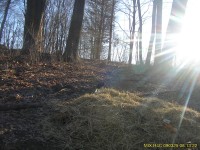