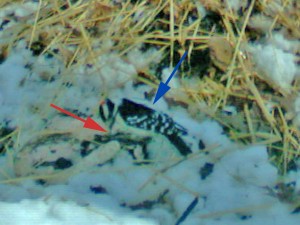 Appearance/Behavior: The downy is the smallest woodpecker (14.5 – 17.0 cm) in eastern North America.  Its plumage is entirely black and white (except for a red patch on the back of the male’s head).  The downy has a central white patch running along its back (blue arrow).  Its stubby beak (red arrow) is less than the width of its head. The single documented visit at the compost piles involved a male and a female. The male (red-capped individual to right in image below) appeared to be feeding on a beef fat trimming (below beak in image above).

Relative Frequency of Visitation in Study: An extremely rare compost visitor, with just a single encounter.

Seasonal Activity: The downy woodpecker is a very common, year-round resident at the study site.  Its sole visit was documented in winter.

Daily Activity:  The sole documented visit was during the daytime.

Similar Species:  The only other woodpecker observed directly at the compost piles is the red-bellied.  This species is considerably larger than the downy and lacks the downy’s relatively large central white patch on its back.  Additionally, the downy’s black facial plumage is absent in the red-bellied woodpecker.  The much larger, and darker pileated woodpecker has been documented in the vicinity of the piles, but not directly on them.   The downy’s plumage is nearly identical to that of the hairy woodpecker (Picoides villosus), a larger (about 24 cm), close relative that also occurs at the study site.  Beyond its overall larger body size, the hairy woodpecker has proportionately longer beak, equivalent to about the width of its head. Other species which are similar to the downy woodpecker and occur at the study site, but which have not been encountered at the piles, include the northern flicker (Colaptes auratus) and the yellow-bellied sapsucker (Sphyrapicus vairus). 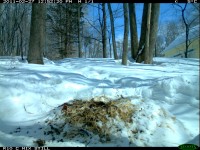