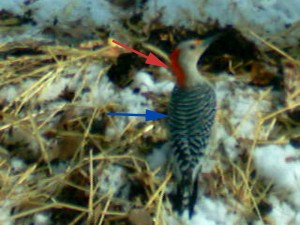 Appearance/Behavior: This woodpecker (about 24 cm) has black-and-white barring along the back, providing a “ladder-back” appearance (blue arrow).  Breast feathers are light gray with a slightly reddish appearance on the belly (although the latter is not readily apparent when viewing a bird in the field).  Both the male and female red-bellied woodpeckers have deep red along the nape (red arrow), with this coloration extending continuously over the head to the base of the bill in the male. The one documented encounter at the compost piles involved a single female.

Relative Frequency of Visitation in Study: A rare visitor, with just several encounters.

Similar Species:  The red-bellied woodpecker’s red coloration on the head and extensive black-and-white barring along the back distinguish it from other birds seen at the compost piles.  The only other woodpecker observed directly at the piles is the smaller downy woodpecker, which has a black and white facial markings and a central white patch on its back.  Both these plumage features are lacking in the red-bellied.  The pileated woodpecker, much larger and darker that the red-bellied, has been documented in the vicinity of the piles, but not directly on them.  Other woodpecker species which are similar to the red-bellied and occur at the study site, but which have not been encountered at the piles, include the northern flicker (Colaptes auratus), the hairy woodpecker (Picoides villosus), and the yellow-bellied sapsucker (Sphyrapicus vairus).  Neither of the first two species has as much red on the head or the substantial black-and-white barring on the back seen in the red-bellied woodpecker.  The sapsucker lacks red plumage on the nape and has a distinctive broad, white stripe running along the wings front edge. 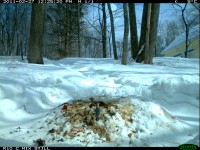 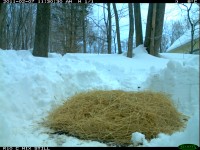