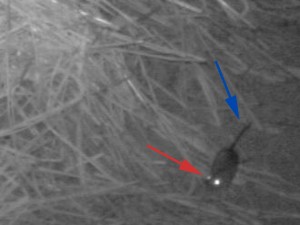 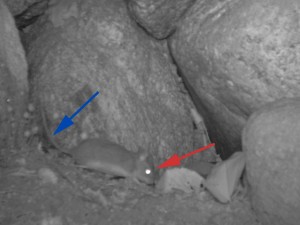 Appearance/Behavior:  This small (15.0 – 20.5 cm) mammal has a light reddish brown head, back, and flanks with a white chin, belly, and feet.  The tail is long (nearly half of overall length; blue arrow) and slender, with minimal contrast between the top and bottom surfaces.  The head bears large eyes (red arrow) and ears.

Relative Frequency of Visitation in Study:  Only a single image (left above) of this mouse has been recorded (by chance during a routine midnight test image capture) at the compost piles.  Such extremely infrequent documentation at the piles likely stems from this rodent’s small size rather than its rarity at the study site.  Cameras focused on the piles are probably too distant (approximately 3 m away) to have their heat/motion sensor triggered by such a small animal.  Cameras focused more closely (< 1 m) on stonewalls within the study site yield relatively frequent encounters with this rodent (right above).  Hair tube monitoring at the piles suggests relatively lower levels of white-footed mouse activity there versus surrounding stonewalls.

Seasonal Activity: Year-round.  The single image of this species was recorded in the summer.

Similar Species:  After the white-footed mouse, the chipmunk is the next smallest mammal recorded at the piles.  The chipmunk’s distinctive dorsal striping and fuller tail set it apart from the mouse.   The North American deermouse (Peromyscus maniculatus), a close relative of the white-footed mouse, also occurs in central Connecticut, although all Peromyscus viewed in hand at the field site appear to be leucopus. The deermouse has a relatively longer tail that is darker on top than below and terminates with a slight tuft.   Based on camera trap images alone, it would be difficult to distinguish between these two congeners. 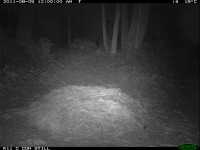 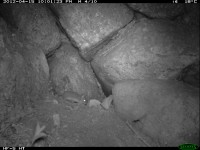