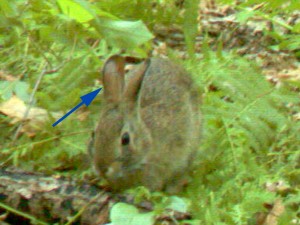 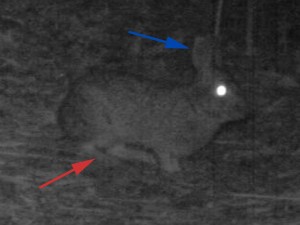 Note:  The rabbit captured in the compost experiment camera images is likely the New England cottontail (S. transitionalis); however, it is difficult to base a definitive identification of this species based on photographic evidence alone, given its close resemblance to the much more common Eastern cottontail (S. floridanus).  We are currently attempting to acquire genetic evidence from the cottontails at our study site to support this tentative identification.  As a result of its sharp population decline in recent decades, the New England cottontail is a candidate for listing under the federal Endangered Species Act.

Appearance/Behavior:  A medium-sized (40-44 cm) mammal, this cottontail has proportionately the longest ears (blue arrow) and hind legs (red arrow) of any species encountered at the compost piles.  Its brownish gray coat color, ends with a short white tail.  All encounters are of solitary individuals in the immediate vicinity of a pile, but not directly on the pile.

Seasonal Activity:  The limited visits recorded have all been in the spring and summer, but this cottontail could potentially be encountered throughout the year.

Similar Species:  Given an unobstructed view, it would be difficult to confuse a rabbit with any of the other mammalian visitor.  However, under infrared illumination (grayscale image), a partial view showing only the fur along the back could be confused with a partial view of a gray squirrel.   Also, a partial view might resemble a woodchuck.  This rodent, however, will lack the rabbit’s long ears and legs.

As mentioned above, photographic evidence alone does not permit a definitive distinction between the closely related New England and Eastern cottontails; nonetheless, the Eastern cottontail lacks the New England cottontail’s black ear fringe illustrated above and frequently has a white blaze on the forehead. 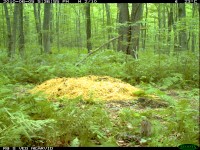 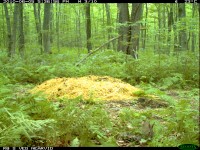 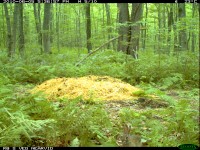 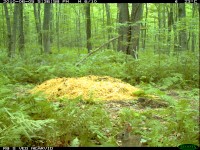 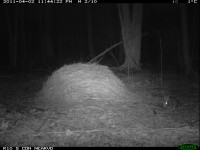 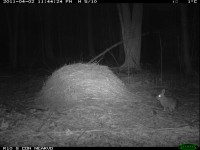 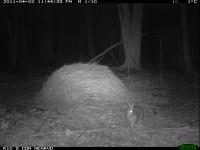 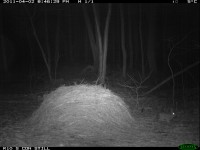 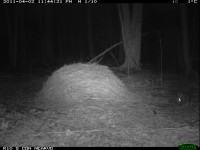 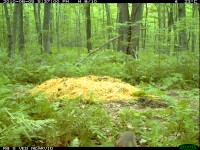 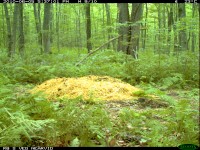 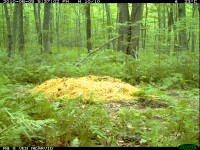 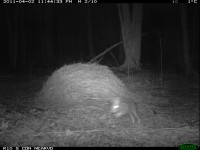 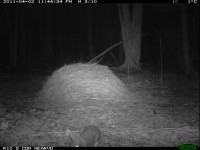 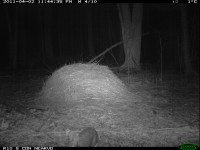