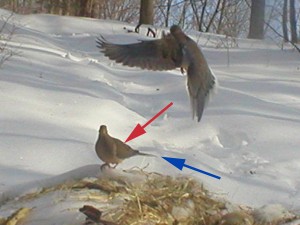 Appearance/Behavior: The mourning dove (23 – 34 cm) has the typical profile of a dove: somewhat squat body, short neck, and a long pointed tail (blue arrow).  It is tan, with the wings and back contrasting with a darker gray tone (red arrow).  The beak is black.

Relative Frequency of Visitation in Study: Rare, only a single visit consisting of two individuals. 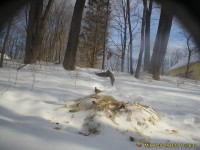