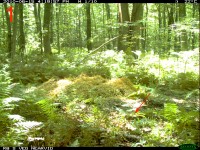 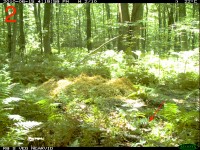 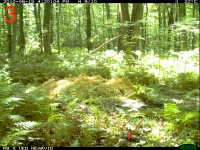 1 ­– In front of pile to right, likely facing left.  [Single eastern chipmunk: in this lateral view (obscured by foliage), the chipmunk’s characteristic black and white striping is visible.]

2 ­– In front of pile to right, facing camera.  [Single eastern chipmunk: this blurred view, further obscured by vegetation reveals what appears to be the face of a chipmunk.  Clearly defined images of a chipmunk were captured before and after this image.]