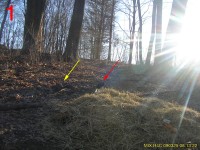 1 ­– In flight hovering over pile, with a gray squirrel (yellow arrow) foraging directly behind pile to left. [Single junco: a challenging image due to the fact the junco is moving and the glare of the low-angle sunlight.  Dark body, light tail underside, and size are all indicative of the dark-eyed junco.  Less than an hour later, a clearer image of two juncos (the only other junco image in study; see the junco well-define image) was captured at the control pile.]